{{sageItemAdded.itemName}}
{{sageItemAdded.msg}}
Checkout
FREE SHIPPING - On all Australian orders over $50
PHONE 1800 673 644 - We will assist you with any query
Download Our Catalogue

Are you reheating food safely?

Reheating food is a good way to reduce food waste and save time. There are, however, a number of risks associated with reheating food due to the bacteria that can multiply when food is reheated to above 5°C. Reheating food safely is vital in reducing the risk of foodborne illnesses which can have unpleasant symptoms such as vomiting, stomach cramps and fever.

Foodborne illnesses occur because bacteria have the chance to multiply on food that is stored at unsafe temperatures. This can cause illness in two ways, either because significant numbers of the bacterium have had a chance to grow on the food, or because the bacteria produce poison as they multiply.

Follow the below guidelines for the correct procedure for reheating food safely:

Which foods are safe to reheat?
Whilst many foods can be reheated safely, some should be avoided all together as the risk of food poisoning is simply too great.

Rice
Rice is commonly understood to be one of the more dangerous foods to reheat and that’s because it can become contaminated by bacteria called Bacillus cereus. These bacteria alone aren’t too threatening as they can be destroyed by hot temperatures, however, studies have revealed that Bacillus cereus can produce dangerous toxic spores that are capable of surviving the reheating process.

Chicken
Reheating leftover chicken itself isn’t too risky as long as the correct guidelines are followed. It is, however, important to ensure that the chicken is served piping hot and cooked through. Implement the use of probe food thermometers to ascertain whether the internal temperature of the chicken is more than 70°C and is, therefore, safe to eat.

Eggs
Whilst reheating eggs that have just been scrambled is okay, it is essential that any dishes containing eggs are stored in the fridge immediately to avoid the growth of potentially harmful bacteria such as salmonella.

Potatoes
Botulism has been shown to form in potatoes that are left at room temperature too long. Caused by toxins produced by bacteria, botulism can have a seriously adverse effect on an individual’s health. Sometimes reheating potatoes fails to make them hot enough to kill these harmful microorganisms making it best to avoid them altogether if you did not refrigerate them right after cooking.

Fildes Food Safety offers a range of commercial kitchen supplies such as food safety posters and food thermometers designed to reduce the risk of foodborne illnesses. To place an order, visit our website or get in touch with a Fildes Food Safety representative. 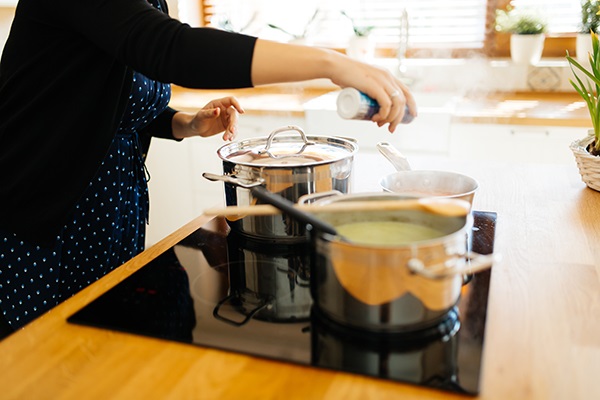